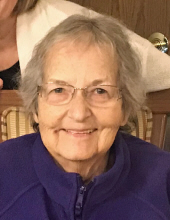 Visitation will be held form 5 to 7 P.M., Wednesday at the Cataldo Funeral Chapel, 160 E. 4th St., in Garner and will resume one hour prior to services at the church.

June Ann Schultz, daughter of Erwin and Elsa (Rambeth) Schmeling was born June 4, 1935, in Palo Alto County in Iowa. She graduated from Cylinder High School in 1953. On June 10, 1956, June married the love of her life, Jim Schultz at St. Luke’s Lutheran Church in Fairville, Iowa. After they were married, June and Jim lived in Whittemore, Iowa. To this blessed union, two children were born, James, Jr. and Janese. June was a devoted wife, mother and homemaker. When the children were in school, June went to work at the Whittemore Elevator where she worked as a bookkeeper. In October 1972, June and Jim moved to Garner, Iowa. June worked for Iowa Mold and Tool for a few months but then took a position in the Auditor’s office at the Hancock County Court House. June continued to work in the Auditor’s office until she retired in 2000.

June was a member of St. Paul Lutheran Church and a member of LWML. She was very involved with many church activities such as quilting, luncheons and craft fairs. She also was also a member of the Red Hat Society. June en-joyed baking, playing cards, keeping her house spotless!! She loved spending time with her children, grandchildren and great grandchild. She was always traveling (along with Jim) to visit her children and to be with her grandchil-dren at their many activities. One of June’s favorite thoughts was if one is good, then three are better. To celebrate June’s life, we thought you would like to know an unknown fact of June Ann - her legal name on her birth certificate is Junie Anne Schmeling. Rest in peace Junie. Love you. XOXOXO