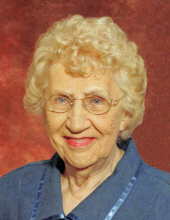 A memorial service will be held 11 A.M., Tuesday, April 16, 2019 at Immanuel Lutheran Church in Forest City with Rev. Rod Hopp officiating. Burial will be at Rose Hill Cemetery in Thompson.

Visitation will be held one hour prior to services at the church on Tuesday.

Memorials may be directed to Immanuel Lutheran Church or MercyOne North Iowa Hospice in Mason City.

June Ione (Roberson) Anderson, was born May 10, 1926, on a farm near Kensett, Iowa. She was the second of four children of Lawrence L. and Julie (Lee) Roberson. June was baptized at Bethesda Lutheran Church in Ames, Iowa, and confirmed by Rev. Alvin N. Rogness on May 12, 1940. That same summer, June attended Bible Camp in Clear Lake and a hymn that week, “Living for Jesus” became the theme for her life. She graduated from Gilbert High School in 1943, and the family moved to a farm nine miles west of Forest City that spring. In the summer of 1944, June attended Estherville Teacher’s College and taught in country schools for the next three years. On November 23, 1945, June married Dean M. Anderson of Thompson at the Lutheran Church in Thompson. They moved to her parents’ farm west of Forest City in 1947 where they continued to live and farm. June and Dean were blessed with four daughters and one son.

June loved being busy. She helped on the farm, had a big garden, was a 4-H leader, Sunday school teacher, and was active in Dorcas Circle and Do Day Quilting at Immanuel Lutheran Church. Hobbies included decorating wedding cakes, sewing, crocheting, quilting, photography, genealogy, traveling, fishing, and painting. For over 30 years, June taught oil painting classes in their home or when June and Dean went to Arizona or Texas each winter. The grandchildren loved to paint at Grandma’s house! June and Dean enjoyed camping with the North Iowa Travelers each summer. With her interest in genealogy, she collected personal stories and pictures for three family history books which are treasured by all. Faith and family were the most important things in June’s life.

June was preceded in death by her parents; brothers, Leonard, of Honolulu, Hawaii and Harold (Mavis) of Payson, Arizona; and a great granddaughter, Hattie Benson of Barrow, Alaska. June will be missed by all who knew her.
To order memorial trees or send flowers to the family in memory of June I. Anderson, please visit our flower store.
Send a Sympathy Card