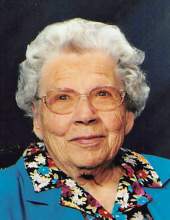 Visitation will be held from 5 to 7 P.M., Friday at the Cataldo Funeral Chapel, 310 Main St., in Woden and will continue one hour prior to services at the church.

Memorials may be directed to First Presbyterian Church in Woden, Titonka Care Center or to the donor’s choice.

Katherine Adella Wood, the daughter of William and Maybelle (Buckton) Kreitlow, was born July 2, 1914 on a farm near Forest City. She attended country school near her home and Forest City High School. On April 22, 1937 she was married to John E. Wood at the Forest City Methodist parsonage. They lived near Woden where they raised their two children, Kathleen and Roger. Katherine helped on the farm and tended a large garden. She was active in 4-H as a leader, band mothers, her church and the Woden Senior Citizens. She enjoyed cooking, dancing, sewing, crossword puzzles, cards, traveling and would always say yes to going on trips with her family.

She was preceded in death by her husband, John in 1999; her parents; and two brothers, Elwin and Warren.
To send flowers to the family in memory of Katherine A. Wood, please visit our flower store.