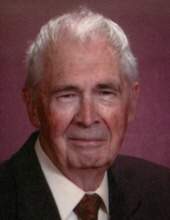 Keith A. Jensen, 91, of Thompson died August 21, 2014 at the Muse Norris Hospice Inpatient Unit in Mason City.
Memorial services will be held 11:00 A.M., Thursday August 28, 2014 at Bethany Lutheran Church in Thompson with Pastor Lynn Noel officiating. Inurnment will be held in Rose Hill Cemetery in Thompson. Upon his wishes he was cremated and there will be no visitation. Memorials may be directed to Bethany Lutheran Church for a project that is yet to be determined in his name.
Keith A. Jensen, the son of Aage and Mabel (Anderson) Jensen, was born May 5, 1923 in Tyler, Minnesota. He attended school in Thompson, graduating from Thompson High School in 1941. Keith furthered his education at Hamilton Business College and Drake University. Keith enlisted into the United States Army and served his country in WWII, he was honorably discharged in 1945.
He returned to Thompson and helped his mother operate the Jensen General Store there. In 1958 he purchased the adjoining business and operated the Jensen Grocery Store until his retirement in 1982. On June 5, 1956 Keith was united in marriage to Barbara V. Jensen at the Presbyterian Church in George, IA. In 1982 Keith and his wife managed LaQuinta Motor Inns at Indianapolis and Omaha before returning to Thompson in 1993. He enjoyed golfing, playing bridge and 500 with friends, walking, jogging, and caring for his special pets (dogs) over his lifetime.
Keith was a member of Bethany Lutheran Church in Thompson since age six, served as a member of the church council and ushered for church services. He also was a member of the Thompson V.F.W., Thompson Business Club and was an active leader of the table tennis group at the YMCA in Forest City.
Keith is survived by his wife, Barb Jensen of Thompson; sons, Paul (Juli) Jensen of Jewell, IA, Blair(Debra) Jensen of Clive, IA and Brad Jensen of Forest City, IA; grandchildren, Marissa and Rachel Jensen of Jewell, IA, Amy Jensen and Courtney Jensen of Cloquet, MN, Brittany (Kyle) Risdall of Duluth, MN; step grandchildren, Nathan, Nicholas, and Grace Hoepker; great granddaughter, Amia Jensen of Cloquet, MN; sister in law, Audrey (Gaylord) Paulsen of Boone; brother in law, Kenneth (Joanne) Jensen of Austin, MN; two nephews, Scott(Kris) Jensen and Jim (Lori) Jensen; four nieces, Marcia (John) Bade, Laurie (Jerry) Wright, Annette(Jeff) Nading and Kristen (Paul) Reimann.
He was preceded in death by his father, Aage Jensen in 1944; mother, Mabel (Anderson) Jensen in 1993; and brother in law, James Jensen in 1998.
To order memorial trees or send flowers to the family in memory of Keith A. Jensen, please visit our flower store.