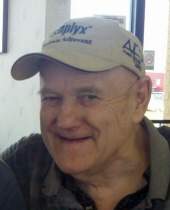 A Celebration of Life service will be held 1 P.M., Sunday, February 2, 2014 in the Round Up room at the Branding Iron in Thompson, Iowa.

There will be no visitation. Cataldo Funeral Home in Britt is in charge of arrangements.

Keith Dorn Thompson, the son of Dorn and Jeanette (Johnson) Thompson, was born October 5, 1938 at Forest City. He attended Forest City Community Schools. Keith was united in marriage to Susan Cooley of Lake Mills. To this union two daughters were born, Kathy and Jill. The couple later divorced. Keith lived and worked in the Forest City area for most of his life. He enjoyed writing songs, animals, spending time at the Branding Iron in Thompson and especially, his family. Keith had a giving personality and big heart. He was often referred to as a man who would give the shirt off his back, even if it wasn't his.

To order memorial trees or send flowers to the family in memory of Keith Dorn Thompson, please visit our flower store.