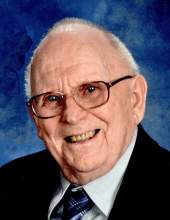 A memorial mass will be held 10:30 A.M., Friday, March 15th at St. Boniface Catholic Church in Garner with Rev. Jim Dubert officiating. Burial will be at a later date at St. Joseph’s Catholic Cemetery in Wesley. Military rites will be conducted by the Garner Veterans Ceremonial Unit.

Memorials may be directed to Gateway Hospice.

Kenneth Henry Haverly, the son of Henry E. and Clara M. (Laux) Haverly, was born April 14, 1925 on a farm east of Wesley in Hancock County. He attended St. Joseph’s Parochial School and helped on the family farm. Kenneth served his country in the U.S. Army during the Korean War from 1949 until 1951. Upon his honorable discharge, he returned home to Wesley. On April 18, 1950 he married Mary Joyce Kollasch at St. Joseph’s Catholic Church in Wesley. Kenneth farmed and later worked for the Wesley Farmer’s Co-Op until his retirement in 1990. In September of 2011, he and Mary Joyce moved to Prairie View Apartments in Garner. He enjoyed playing cards, tinkering on small machinery, listening to old time music and, in his younger years, dancing.

He was preceded in death by his parents; an infant sister, Jean Marie Haverly; grandson, Walter, Jr.; great granddaughter, Macy Renae Gatton; and two brothers, Dennis and Hugh Haverly.
To send flowers to the family in memory of Kenneth H. Haverly, please visit our flower store.