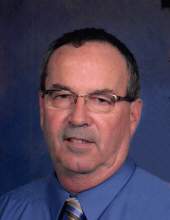 Mass of Christian Burial will be held 10:30 a.m., Wednesday, June 23, 2021 at St. Benedict Catholic Church in Decorah with Rev. Fr. Donald Hertges officiating.  Burial will be in the church cemetery.

Kenneth Michael  McCormick, the son of Joseph and Adeline (Walter) McCormick, was born November 23, 1945 at Decorah.  He graduated from Decorah High School in 1963.  After high school Ken worked at Nordness Creamery in Decorah as a butter maker supervisor.  On November 14, 1964 he married Mary Benson at St. Benedict Catholic Church in Decorah.  To this union four children were born:  Connie, Kevin, Scott and Susan.  In 1966 he went to work at Decorah Creamery as a cheese maker supervisor.  In 1976, the family moved to LuVerne, Iowa where they owned and operated Ken and Mary Lounge. They moved to Garner in 1982 and later to Clear Lake.  Ken and Mary owned and operated Back Yard Deli in Clear Lake for 17 years until selling it to their son, Scott.  Ken then began selling cars at Schukei Chevrolet and Mason City Ford until his retirement.  He was a great car salesman and cherished the many friendships he formed with customers over the years.  Ken will always be remembered for his many trips to Wendy’s in Mason City to order his usual Crispy Chicken Sandwich and a senior Sprite.  In his retirement he worked part-time at Hy-Vee for several years.  He enjoyed wintering in Harlingen, Texas, golfing, bowling, camping, playing pool and cards, having coffee on the corner with the guys and especially attending his grandchildren’s activities.  Ken was an avid Iowa Hawkeye and Minnesota Viking fan.

He was a member of the Knights of Columbus,  I.O.O.F. in Decorah and Clear Lake and the Clear Lake Evening and Noon Lions Club.  He also served on the Decorah and LuVerne Fire Departments.

He was preceded in death by his parents; brothers, Jerry (Helen) McCormick and Dale McCormick; sisters, Carol Quam and Joyce (Gary) Gates; and nephews, Terry McCormick and Kyle McCormick.
To send flowers to the family in memory of Kenneth M. McCormick, please visit our flower store.