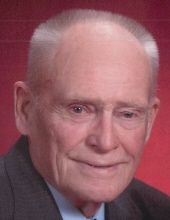 Burial will be held in Rose Hill Cemetery in Thompson, Iowa. Military Honors will be performed by the Forest City American Legion Post #121.

In lieu of flowers, memorials may be directed to the Bethany Lutheran Church.

Kenneth Philip Robinson was born on July 18, 1930 the son of Bert and Laura (Schauf) Robinson and was baptized in Grant Lutheran Church. He attended country school in Linden township and graduated from Thompson High School with the class of 1947.

Kenneth entered the United State Marine Corps in February 1952 and was honorably discharged from the service in October of 1953 to operate the family farm south of Thompson upon the death of his father. He remained there until he retired from farming in 1980, later moving to Burlington, Wisconsin to be near his brother Philip and family. Kenneth married Phyllis Ann Hauan in 1997 and the couple returned to reside in Forest City.

Ken loved gardening in his retirement years and enjoyed giving much of his produce to friends and family. After the death of his wife, his health began to decline and ultimately, he moved to the Good Samaritan Center in Forest City in 2015.

Kenneth was preceded in death by his parents and his wife, Phyllis.

He is survived by his two brothers, Bert of Dillon, Montana and Philip of Cheyenne, Wyoming, two nephews, Theodore Robinson of Cheyenne, Wyoming, and Lucas Robinson of Hamilton, Texas and one niece, Robin Majd of Mandeville, Louisiana.
To order memorial trees or send flowers to the family in memory of Kenneth Philip Robinson, please visit our flower store.
Send a Sympathy Card