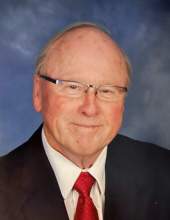 A memorial service will be held 10:30 a.m., Friday, September 10, 2021 at Zion Evangelical and Reformed Church in Garner with Rev. Brian Lund officiating.  Inurnment will be at Concord Township Cemetery in Garner.

In lieu of flowers, memorials may be directed to the Garner Police Department or Garner Volunteer Ambulance Service in memory of Ken.

Kenton Leroy Mick, the son of Lester and Vyrlee (Ramer) Mick, was born June 23, 1937 at Newton, Iowa.  He attended Emerson Hough Elementary School in Newton and wrote the school song which is still being  used today.  Ken graduated from Newton High School in 1955.  After high school he played semi-pro baseball for a time in central Iowa.  On October 28, 1956 he married his high school sweetheart from Monroe, Iowa, Elizabeth Foster.  They were married at the Christian Church in Prairie City, Iowa.  Ken and Betty lived in Newton until 1963 when they moved to Humboldt.  Ken owned and operated the local Coast to Coast Store and was active in the community.  It was during this time that Ken earned the Distinguished Service Award from the Junior Chamber of Commerce for outstanding community service through loyal, faithful and unselfish efforts resulting in lasting contribution to community and nation.  In 1983, the family moved to Garner and he began working at MBT in Forest City until his retirement.  He was an active member of the Rotary and held numerous offices during his tenure including president.  He received the Paul Harris Fellow Recognition for his service.  Ken ran his own business serving for 30 years as an appraiser until 2021.   Community was important to Ken and he served as mayor of Garner for the past 16 years.  Some of the projects Ken was most proud of helping with during his terms were the construction of the rec center, the Avery Theater revival, and the library renovation.  Ken was awarded the Pillar of the Community by the Chamber of Commerce for being an advocate and strong community leader. He enjoyed spending time with his family, golfing, playing church league softball and attending his children’s and grandchildren’s activities over the years.

He was a member of Zion Evangelical and Reformed Church in Garner and the church choir.  Ken was also active in barbershop chorus and Hancock County Little Theatre.  He and Betty loved entertaining children playing Mr. and Mrs. Santa at the library for many Christmases.

He was preceded in death by his parents; and daughter, Lori Mick.
To order memorial trees or send flowers to the family in memory of Kenton "Ken" L. Mick, please visit our flower store.