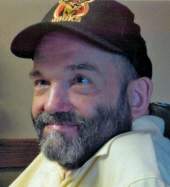 Visitation will be held from 9:30 to 11 A.M., Friday, April 18th at the Cataldo Funeral Chapel in Garner with a Scripture service at 11 A.M. Burial will follow at Concord Township Cemetery in Garner.

Memorials may be directed to Mosaic in North Central Iowa.

Kim Orley Weaver, the son of Elwin and Florence (Renberg) Weaver was born January 5, 1954 in Belmond. Kim lived with his parents until the age of eleven when he moved to Tommy Dale in Sioux City. He then moved to Woodward before making his permanent residence at Mosaic in Forest City. Kim enjoyed being around people and the outdoors.

Kim's family would like to thank the staff at Mosaic in Forest City for the wonderful care and support he received over the years.

To order memorial trees or send flowers to the family in memory of Kim Orley Weaver, please visit our flower store.