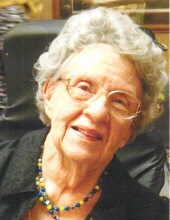 A visitation will be held from 5:00 – 7:00 P.M. Tuesday at Cataldo Schott Funeral Chapel, 505 North Clark St. Forest City, IA 50436 and continue one hour prior to services at the church on Wednesday.

Interment will be in First Baptist/Oakland Cemetery in Forest City.

Lois Lorraine Swanson was born on April 12, 1921, the daughter of C. D. “Ted” and Alice (Larson) Fox, at the home of her grandparents in Carlton County, Minnesota. A short time later they moved to Forest City, Iowa, where she spent her entire life until she entered Westview Care Center in Britt four years ago. She remained there where she peacefully went home to be with her Lord and Savior on November 29, 2017.

Attending school in Forest City, she was involved in music, both vocal and concert band, and graduated from Forest City High School in 1939. After attending Cedar Falls Teachers’ College, she taught at rural schools in Winnebago and Hancock Counties. Later she worked as the bookkeeper for both the Forest City Dairy and Forest City Creamery.
Lorraine was a member of First Baptist Church where she was involved in youth groups, Prayer Warriors, and taught first grade Sunday School for 40 years. She was always musically involved (choir and Sunday School pianist) and also ministered in Dorcas Society and Mission Circle.

On December 7, 1945 she married Virgil Swanson in Duluth, Minnesota, after which they made their home on Virgil’s parents’ farm where a house had been built for them. They spent their entire 65 years together on the family farm. Here she was a hardworking wife, mom, grandma, and great-grandma who loved spending time with family and kept busy with special sewing and embroidery projects for which she will always be remembered by those who received them.

Lorraine was preceded in death by her parents C. D. “Ted” and Alice Fox, beloved husband Virgil in 2011, infant son Robert in 1947, sister and brother-in-law Darlene and Art Beekmann, and sisters-and brothers-in law Delmer and Lillian Swanson and Ethel and Chester Gunderson.