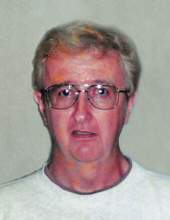 A memorial visitation will be held from 2 to 4 P.M., Saturday, March 20, 2021 at Cataldo Funeral Chapel, 310 Main St., Woden. A private inurnment will be at Bingham Township Cemetery south of Woden with military rites by the Britt Veterans Ceremonial Unit.

Lannie Alan Buns, the son of Henry and Violet (Wieth) Buns, was born August 22, 1952 in Forest City. He was baptized and confirmed at St. John’s Lutheran Church in Woden. Lannie graduated from Woden-Crystal Lake High School and served his country in the U.S. Army. Following his honorable discharge, he returned to Woden and was employed at Winnebago Industries in Forest City until his retirement in August of 2020. Lannie enjoyed putting together model cars and collecting Dale Earnhardt and U.S. Army memorabilia.

Lannie is survived by his sisters, Jackie Fredrickson of Forest City and Betty Hanna of Crystal Lake; a brother-in-law, Bill Fortner of Broken Arrow, OK; and many nieces, nephews and other family.

He was preceded in death by his parents; sister, Diane Fortner; two brothers-in-law, Steven Hanna and Larry Fredrickson; a nephew, Mark Hanna; an infant nephew; and two infant nieces.
To send flowers to the family in memory of Lannie A. Buns, please visit our flower store.