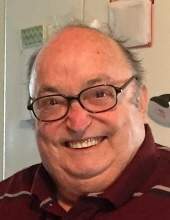 Memorial services will be held 10:30 A.M., Monday, May 16th at the United Methodist Church in Britt with Rev. Robert Dodge officiating. Burial will be in Evergreen Cemetery with military rites by the Britt Veterans Ceremonial Unit.

A memorial visitation will be held from 5 to 7 P.M., Sunday at the Cataldo Funeral Home in Britt.

Larry Lee Kerns, the son of Paul and Lura (Cruickshank) Kerns, was born March 19, 1936 at Plover, Iowa. He graduated from Rolfe High School in 1955. After high school, Larry joined the U.S Army serving in Germany. Upon his honorable discharge, he returned to Iowa. On June 21, 1959 he married Jeanice Clark in Pocahontas. They lived in Pocahontas, Clear Lake and in 1967 moved to Britt. Larry worked at Kerns Implement and Honda Sports in Britt, was a courier for Hancock County Memorial Hospital in Britt and delivered cars for Pritchard Auto. He enjoyed watching stock car racing, bowling, going to local high school sporting events and was an avid Iowa Hawkeye fan.

He was a member of the United Methodist Church in Britt, Britt American Legion and the Britt Lions Club.

He was preceded in death by his parents, Paul and Lura Kerns; step-mother, Diamond Kerns; and brother, Merle “Moe” Kerns.
To order memorial trees or send flowers to the family in memory of Larry L. Kerns, please visit our flower store.