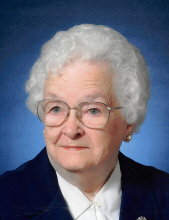 Visitation will be held from 5 to 7 P.M., Thursday at Cataldo Funeral Chapel in Garner and will resume one hour prior to services at the funeral chapel.

Memorials may be directed to St. Paul Lutheran Church.

LaVina Marjorie Bakken, the daughter of LeRoy and Gladys (Swenson) Tendall, was born March 18, 1921 at Clarion, Iowa. She attended the rural schools of Wright County and graduated from Belmond High School. After high school, she helped families in the area as a nanny. On November 29, 1947 she was united in marriage to Carrol Bakken at Trinity Lutheran Church in Belmond. They lived on an acreage near Clarion until moving to a farm south of Garner in 1957. In 1976, they retired from farming and moved into Garner. In their retirement, they traveled across the country in their motor home and took trips to New Zealand and Norway. LaVina enjoyed spending time with her family, quilting, sewing and playing Scrabble.

She was a member of St. Paul Lutheran Church and Lutheran Women’s Missionary League.