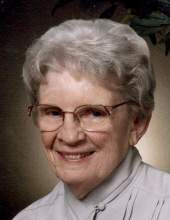 In lieu of flowers, memorials are preferred in her name to the American Cancer Society or Garner United Methodist Church.

LaVon Evelyn Brown, the daughter of William and Cora (Eden) Hauptly, was born March 11, 1926 on a farm north of Wesley. At the age of eight, she moved with her family to Woden. LaVon received her education at Bingham Township #1 rural school. She was a great believer in education, so when the opportunity presented itself later in life, she received her high school diploma. In her early years she did housework for local neighbors and, of course, helped on the family farm. LaVon met Merle Brown at a church service shortly after he was discharged from the service. They were married February 11, 1947 at the Methodist Church in Woden. They lived on several farms in the Woden area and worked for area farmers. The couple were blessed with two daughters, Linda and Patsy. In 1959, they bought a farm north of Garner. They continued to live on the farm until 1980 when they built a house in Garner. LaVon loved the rural life and being outdoors helping with the field work or working in her large vegetable/flower garden. She also worked side-by-side her husband in the auction business. LaVon and Merle loved square dancing and traveled many places to participate – even as far away as Hawaii. She loved her family including grandchildren, great grandchildren and great-great grandchildren and spent many hours making special memories.

She was a member of the Garner United Methodist Church where she was a Sunday school teacher and active in the UMW. She also was a 4-H leader and spent many hours in volunteer work in her church and community which included assisting the Garner Ambulance Service for over 30 years as a back-up caller. She loved working with students at Garner-Hayfield-Ventura Elementary School as a reading buddy and pen pal. LaVon was active in the Garner VFW and American Legion Auxiliaries and spent many hours helping to make Valentine cookies for her Relay for Life team to fight cancer.

She was preceded in death by her parents; husband, Merle, Dec. 28, 2003; infant daughter, Ranae; and sister, Velma Nelson Culbertson.
To order memorial trees or send flowers to the family in memory of LaVon E. Brown, please visit our flower store.