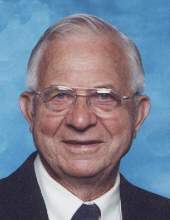 Funeral services will be held 10:30 A.M., Thursday, March 1st at the United Methodist Church in Forest City with Rev. Les Green officiating. Burial will be at Madison Township Cemetery in Forest City with military rites by the Garner Veterans Ceremonial Unit.

Visitation will be held from 4 to 7 P.M., Wednesday at the Cataldo Funeral Chapel, 160 E. 4th St., in Garner and will continue one hour prior to services at the church.

Lawrence William Pinneke, the son of William and Rose (Behm) Pinneke, was born May 8, 1932 on a farm near Manly. He grew up on an acreage outside of Sheffield and at the age of nine moved with his family to Mason City where he attended school. Larry entered the U.S. Air Force in 1952 and served his country in the Korean War until his honorable discharge on February 28, 1956. He met Merna Hansen at the Surf Ballroom in Clear Lake at a country western dance night. They were married on October 28, 1956 at the United Methodist Church in Forest City. To this union three children were born, Jim, Mike and Julie. The couple made their home on a farm west of Miller for 58 years where they raised their family and farmed. In 1997, Larry retired from farming and then became a substitute custodian for the next 15 years for the Forest City Community School District. In 2013, Larry and Merna moved into Garner. He enjoyed woodworking in his shop, going to garage sales and spending time with his grandkids.

He was a member of the Forest City United Methodist Church where he served on the administrative council. He also served on the Garner Creamery Board, Farmer’s Cooperative Elevator Board, Farm Bureau Board and was involved with the Miller Telephone Company.