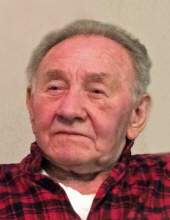 Private family funeral services will be held 1:30 P.M., Friday, November 13, 2020 at the United Methodist Church in Britt with Rev. Robert Dodge officiating. A public graveside service will follow at Evergreen Cemetery in Britt with military rites by the Britt Veterans Ceremonial Unit. The service will be livestreamed on the Britt United Methodist Church Facebook page.

Memorials may be directed to the United Methodist Church in Britt.

Lawrence Vernon Smidt, the son of Ole and Cora (Abbas) Smidt, was born June 5, 1931 in Britt. He attended the rural schools of Hancock County until the tenth grade. On November 21, 1952 he married Shirley A. Cook at Wesley United Methodist Church in Mason City. He served his country in the U.S. Army from February of 1954 until his honorable discharge in February of 1956. Lawrence and Shirley lived in Britt all of their married life where they raised their four children. Lawrence was employed for many years for Iowa Electric Light and Power Co. in the Britt diesel generating plant, and then at the nuclear plant in Palo, Iowa until his retirement. He enjoyed working on all things mechanical, including cars, his kid’s bikes and pretty much anything else. He greatly enjoyed traveling with his young family by car all over the United States and made many trips to the west coast to visit relatives. He always had time for his family and worked very hard to provide for them.

He was a member of the United Methodist Church and Britt American Legion.