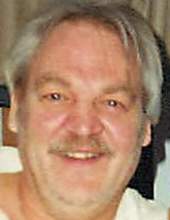 A memorial visitation will be held from 4:00 P.M. until 6:00 P.M., Thursday, November 13th at the Cataldo Schott Funeral Home in Forest City. A service will follow the visitation at 6:00 P.M. with Pastor Justin May officiating.

Memorials may be directed to the Leo Steenblock Memorial Fund in care of the family.

Leo Arthur Steenblock, the son of Peter and Fanny (Decker) Steenblock, was born June 15, 1950 in Mason City. He attended Mason City High School, graduating in 1968. He enlisted in the Army and was stationed in Germany. He was in charge of training troops and loading tanks and was honorably discharged in 1972. In 1977 Leo met JoAnn Moen; they were married September 10, 1983. He worked at Winnebago Industries for over twenty years.

He loved spending time with his family and pets especially his dog Outlaw, he also enjoyed cruising with JoAnn, going to the casino and collecting ships.

Leo was preceded in death by his parents; eight brothers; and one sister.
To send flowers to the family in memory of Leo A. Steenblock, please visit our flower store.