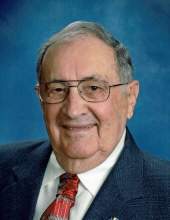 Visitation will be held from 2 to 5 P.M., Sunday at St. Wenceslaus Catholic Church in Duncan with a Scriptural wake service at 1:30 P.M. followed by a 4th Degree Knights of Columbus rosary. Visitation will continue one hour prior to services at the church on Monday.

Memorials may be directed to St. Wenceslaus Catholic Church or MercyOne Hospice of North Iowa. Arrangements are with Cataldo Funeral Home.

Leonard E. Paca, the son of Frank and Emma (Brcka) Paca, was born June 21, 1922 on the family farm north of Duncan. He attended the rural schools of Garfield Township in Hancock County. Leonard served his country during WW II in the South Pacific Theatre. He was among one of the first troops to land in Japan when they dropped bombs on Nagasaki and Hiroshima. When the war ended, he remained in Japan where he met General Douglas McArthur and his wife. After his honorable discharge, he returned home and farmed with his father. Leonard always had an interest in flying and took flying lessons at the Garner airport upon returning home from Japan. On April 25, 1951, he married Monica Wellik at St. Wenceslaus Catholic Church in Duncan. They moved to an acreage south of Duncan where they farmed and raised their family. In 1988, they retired and moved into Garner. Leonard and Monica enjoyed wintering in Texas for 20 years. He enjoyed his family, grandchildren and great grandchildren and going to all of their activities. Leonard also enjoyed watching the Iowa State Cyclones football and basketball teams on television, listening to West Hancock football and basketball games on the radio, cheering on the Green Bay Packers and was the biggest fan of the K20 Paca Farms racing team and Britt Happens ball team.

He was a lifelong member of St. Wenceslaus Catholic Church in Duncan where he served as a eucharistic minister and was a member of the church council, Catacatacal Council, Catholic Workman and a fourth degree Knight of Columbus. He also was a member of REA, Britt American Legion, Liberty Township trustee, served on the board of directors of the Farmer’s Coop in Britt and member of Polka Dance Club and POLKA Royalty. He was proud that he was able to go on the Honor Flight to Washington D.C. with his son Tom in 2010. His three greatest loves were his faith, family, and farming.

He was preceded in death by his parents; brothers, Ray and George Paca; son-in-law, Harris (Skip) Lackore; brother-in-law, Elmer Wellik; and sisters-in-law, JeanAnn and Madelyn Paca.
To order memorial trees or send flowers to the family in memory of Leonard E. Paca, please visit our flower store.