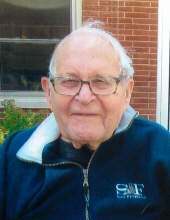 Memorial services will be held at 11:00 A.M., Friday, July 7, 2017 at the Forest City United Methodist Church with Pastor Les Green officiating. Upon Leroy’s wishes he was cremated and there will be no visitation.

Burial of cremains will take place in Oakland Cemetery in Sac City, Iowa at 1:00 P.M., Monday, July 24, 2017. The family will have a reception following graveside services at First Christian Church in Sac City.

LeRoy Nels Nelson was born September 4, 1924 in rural Valpariso, Nebraska, the fourth child of six of Nels Oral and Lillian B. (Carlson)Nelson. He attended country school through the eighth grade. LeRoy always regretted he did not have further education. As a result of the Depression it was necessary the family all get jobs. They moved to Sac County, Iowa in 1940. In 1943

LeRoy entered into the United States Navy and served until 1946. LeRoy was a carpenter’s mate in the Navy. When he was discharged he attended Dunwoody Institute in Minneapolis, MN for training in construction on the G.I. Bill of Rights.

After completing his education, he returned to Sac City, he was employed by several building contractors before becoming self-employed and owned and operated his own business over 50 years. He was a long-time member of the First Baptist Church, First Christian Church and most recently the Forest City United Methodist Church. He belonged to the American Legion and the V.F.W. in Sac City, Iowa. He was also a member of the Eastern Star of Sac City and in 2014 #68 O.E.S. of Algona. He was a 50 year member of the Masonic Lodge #178 in Sac City.
On May 23, 1954, he was married to Margaret Jean Tapley at the United Methodist Church in Sac City. On November 16, 2013 LeRoy and Margaret moved to Forest City. LeRoy became a resident of the Good Samaritan Center in Forest City on January 14, 2015.

In 1970, LeRoy and his friends from his church went to Haiti and the island of Lagonave on a mission trip for three weeks. They built a parsonage for the church on the island. He took some of his tools and left them for the people of the island. This was a very gratifying trip for LeRoy.

He was preceded in death by a son, Jerrold (Jerry) LeRoy Nelson; parents; one brother, Wilbur Nelson and one sister, Pearl Bossom.
To order memorial trees or send flowers to the family in memory of LeRoy Nels Nelson, please visit our flower store.