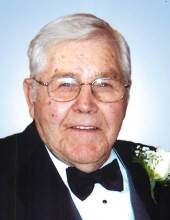 LeRoy Thompson, 94, of Forest City passed away Sunday, May 24, 2015 at the Muse Norris Hospice Inpatient Unit in Mason City.

Funeral services will be held 10:30 A.M., Wednesday, May, 27, 2015 at First Baptist Church in Forest City with Pastor Eric Weaver officiating.

Interment will be held in the Madison Township Cemetery.

Memorials may be directed to the First Baptist Church Haiti Project.

LeRoy was born November 8, 1920 in Forest City, IA, the son of Walter and Beatrice (Newland) Thompson. He was married to Doris Mae Hall on February 28th of 1942. LeRoy and Doris were blessed with over 71 years of marriage together.

LeRoy and Doris farmed together in Leland, Crystal Lake, and Forest City, before settling on a farm four miles west of Leland in 1952. They lived there for 30 years before retiring in 1982. They then moved to an acreage two miles outside of Forest City where they enjoyed another 30 years together. In their retired years they enjoyed camping and they spent their winters in south Texas.

LeRoy enjoyed raising cattle the first part of his farming career and was named Iowa’s Cattle Feeder of the Year in 1965. He spoke at cattle conventions around the country sharing his experience in production testing. In 1967 he transitioned to just crop farming and in 1974 he was awarded the National Farm Efficiency Award from the Ford Foundation for soybean production.

LeRoy won many crop yield contests over the years and served on various state committees and local boards. He enjoyed selling corn and soybean seed the last few years of his farming career.

LeRoy was faithfully committed to God and was actively involved at Calvary Baptist Church for many years serving in various roles as Sunday School Superintendent, Deacon as well as teaching Sunday School. Throughout his life he also enjoyed wood working, golfing and fishing.