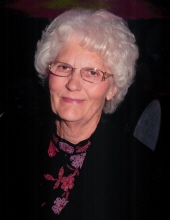 Lila I. Rauk, 81 of Leland died peacefully surrouneded by her family Tuesday, March 19, 2019 at the Westview Care Center in Britt, Iowa.

Burial will be held in Winnebago Lutheran Church Cemetery.

In lieu of flowers, memorials may be directed to the Winnebago Lutheran Church.

Lila Rauk, the first-born daughter of Ingvald and Lavina (Torkelson) Askeland was born April 8, 1937 in Buffalo Center, Iowa. Lila graduated from Buffalo Center High School in 1954 and began working at the local hospital. On March 18, 1955, Lila was united in marriage to Carlin “Butch” Egesdal, Jr. As a young couple they ran the locker in Ledyard prior to becoming farmers in several surrounding communities. In 1966, they purchased a small farm near Leland where Lila lived until she moved to Forest Plaza in 2009. In 1978, two years after Butch was tragically killed in a small plane crash, Lila was united in marriage to Arlyn Rauk. During the years between her marriages, Lila became known as an outstanding hog farmer and ultimately it was her passion for farming that made Arlyn escape his bachelor life. Together, they enjoyed raising pigs, cows, crops, and grandchildren.

Lila will always be remembered as an incredibly hardworking lady. She loved to bake and was often found delivering bars or kringla to the guys in the elevator or fields. After retiring from hog farming, Lila loved spending time on her John Deere lawn tractor and shopping at her favorite gift shops.

Lila loved playing with her grandchildren and teaching them many bits of wisdom. She taught them all a love for Jesus, land, animals, and ice cream.

She was preceded in death by her son, David on September 24, 1964, husbands, Butch Egesdal on July 10, 1976 and Arlyn Rauk on January 30, 2005 and parents Ingvald and Lavina Askeland.
To order memorial trees or send flowers to the family in memory of Lila I. Rauk, please visit our flower store.
Send a Sympathy Card