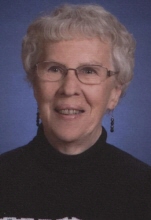 Lila M. Gossman, 82, peacefully passed away Thursday, April 24, 2014 surrounded by her family at the Muse Norris Hospice Inpatient Unit in Mason City. Memorial Services will be held at 10:00A.M. Tuesday, (April 29, 2014) at the Bethany Lutheran Church, 183 2nd Ave. East, Thompson, IA with the Pastor Lynn Noel officiating. A gathering of friends and family will be held 4:00-7:00 P.M. Monday (April 28, 2014) at Petersen Lund Funeral Home, 505 North Clark St. Inurnment of cremains will be held in the Graceland Cemetery, Buffalo Center, IA. Memorials may be directed to the Hospice of North Iowa or the donor's choice.
Lila Marie Arndt was born on September 19, 1931 in Guckeen, MN as the eldest child of Glen Edward Arndt and Verna Marie Frybarger. She was quickly followed by four brothers (one dying in infancy) and one sister 11 years younger. She spent most of her early years during these hard economic times in Blue Earth where her father worked periodically for the city or at a lumbermill. Her mother developed TB and at age 11, Lila was depended on to fetch water, cook, and tend to her younger siblings. Despite all these hardships on a young person, Lila still did very well in school, and graduated from Blue Earth High School in 1949. Not long after that, her three brothers left for three branches of the military, one just not coming home after school. She lost her mother in 1956 and her father in 1959, and cared for her younger sister until she completed High School who then left for California with the rest of her immediate family.
She met Duane Gossman at the roller skating rink in Blue Earth, and following that worked as a waitress in Thompson before she and Duane were married June 7th, 1950 in the priest's house of St. Patrick's Catholic Church in Buffalo Center. They lived as sharecroppers with Duane's parents on the family farm for three years. During this time Lila gave birth to Duane Kenneth Jr. (Bud) and Bridget Ann. They then moved across the section to a vacant farm house for a few more years where Diane Marie was born, and when Duane's parents moved to town, they returned to the farm where Lila had Linda Sue and Kent Michael.
The farm was in full operation with two barns, milk cows, hogs, beef cattle, horses, 400 chickens, a large garden, and a busy bunch of children. Cousins and relatives from California would send their children to the farm to spend a summer, perhaps do some work, but mostly they enjoyed the farm experience along with being another mouth to feed for Lila. With all those responsibilities, and five children at home, Lila chose to provide more opportunities for her children. So in 1968 she took a job from 11pm-7am at the Timely Mission Nursing Home. Later moving to afternoon shift, this would be a job she held for 44 years and retired from in January, 2012 at age 80. Lila spent her entire life since age 11 caring for others. At Timely Mission, she became attached to residents of the nursing home since some received her care for decades with limited family contact. Lila was depended on to teach young CNA's how to properly care and respect the people they served. She typically attended many funerals every year.
Lila found interests outside the demands of the farm including dabbling with golf, she joined the bowling league, community circle, and became a member of the Bethany Lutheran Church in Thompson. She was very sentimental and collected little items as keepsakes, a locket of hair, a postcard from Grandma, letters of love, a necklace from a trip, all the letters her son wrote from the service, anything to cherish good memories were delicately preserved. She loved to surround her life with the color purple. Lila had an old electric typewriter that she used to send letters to her family and friends. She faithfully sent all her grandchildren savings bonds every year for birthdays. Never an event was missed that didn't get a card with a note written or a typed letter enclosed to her immediate and extended families.
She moved into Buffalo Center in 1991 and purchased her home located close to work. Besides her children, the most enjoyment she felt was when she entertained family and friends that would frequent her home. She loved to cook and had a gift for making things from scratch, or turning left-overs into tasty meals. Lila had many friends and a large extended family of 37 cousins. She collected dolls, something she missed as a child. She took up crafts, took a second job as a waitress in her 70's, and also took over the care for her mother's sister Alice who is 98 and still lives at the nursing home. She so loved grandkids calling or coming to see her, birthday get-togethers, reunions, her weekend trips with her daughters shopping, and the vacations they took her on to Mexico and the Caribbean.
The cancer that took Lila had a very quick onset and duration. She had so little time to enjoy her retirement and had just started living her new life with her new dog Buddy.
Lila was survived by three daughters and one son, Bridget Neilon (Jerry Hanson) of Northwood, Diane Penning of Rochester, Linda Kemmerer (Mark) of Clear Lake, and Kent (Cheryl Beck) of Renton, WA. She is also survived by one sister Dorothy of San Jose, CA, and her aunt Alice Smith of Buffalo Center. She was blessed with 11 grandchildren and 6 Great-Grandchildren. She was preceded in death by one son Duane Jr. (Bud), one grandson Jarrett Roberts, four brothers Gene, Don, and James, Eugene and her parents.

To order memorial trees or send flowers to the family in memory of Lila M. Gossman, please visit our flower store.
Send a Sympathy Card