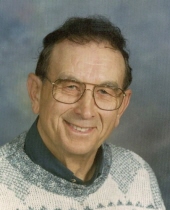 Funeral service will be held at 10:30 A.M., Saturday, November 23rd at the First Lutheran Church in Britt with Pastor Lee Nelson officiating. Burial will be in Evergreen Cemetery with military rites by the Britt Veterans Ceremonial Unit.

Lloyd Marlin Gjerde, the son of Lloyd T. and Florence (Bergman) Gjerde, was born November 5, 1934 at Crystal Lake. He graduated from Crystal Lake High School in 1952. LLoyd was drafted after high school into the U.S. Navy and was stationed in Honolulu, Hawaii. Following his honorable discharge, he returned home and hauled poultry. On December 12, 1958 he married Alice Hanson at Immanuel Lutheran Church in Scarville. They made their home in Woden until 1976 when they moved to Britt. Lloyd was a salesman for Electrolux and also worked as a custodian at Britt Community Schools from 1988 to 1994. In 1994, Lloyd and Alice moved to West Des Moines where they managed apartment complexes. In 2006, they returned to Woden living in the same house they moved out of thirty years earlier. They later returned to the Des Moines area before recently moving back to Britt in September of 2013. Lloyd enjoyed water skiing, basketball, and watching baseball and football.

He was preceded in death by his parents; grandson, Nicholas Gjerde, Jan. 15, 2011; and two brothers, Eugene and Greg Gjerde.

To order memorial trees or send flowers to the family in memory of Lloyd Marlin Gjerde, please visit our flower store.
Send a Sympathy Card