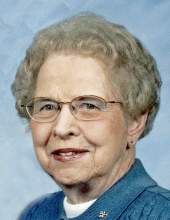 Funeral services will be held 10:30 A.M., Friday, August 23, 2019 at the United Methodist Church in Garner with Rev. Michael Schaefer officiating. Burial will be at Concord Township Cemetery.

Visitation will be held from 4 to 6 P.M., Thursday at the United Methodist Church Fellowship Hall in Garner. Visitation will resume one hour prior to services at the church.

Memorials may be directed to the LoraMae Schoneman Memorial Fund.

LoraMae Schoneman, the daughter of William and Louise (Reichert) Lehmann, was born September 14, 1922 at Balfour, ND. At an early age she moved with her family to Tyndall, SD where she attended school until the seventh grade. She then moved to Rock Valley, Iowa and later George, Iowa where she graduated from high school. LoraMae continued her education at Iowa State Teacher’s College in Cedar Falls for two years receiving her teaching certificate. She taught in the rural schools near George for four years before moving to Spokane, WA to help in civil service during WW II. After the war, she moved to Garner and began her teaching career in January of 1946. On June 14, 1947, she was married to Maynard Schoneman in Sibley, Iowa. They lived all of their married life in Garner. LoraMae continued to teach kindergarten in Garner until retiring in 1987 after 45 ½ years of teaching. She enjoyed golfing, playing cards, knitting and reading.

She was a member of the United Methodist Church in Garner, UMW, Recital Club, Homemaker’s, four bridge groups and the Garner Ladies and Couples Golf Leagues.

LoraMae is survived by a brother-in-law, Marvin Schoneman of Garner; sister-in-law, Betty Brugman of Eden Prairie, MN; many loving nieces, nephews; and great-nieces and nephews.