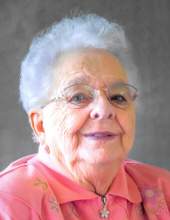 In lieu of flowers, memorials may be directed St. Paul Lutheran Church in Garner.

Lorraine Sophie Cohrs, the daughter of Milton and Louise (Herrig) Readinger, was born October 22, 1932 in Guthrie Center, Iowa. She graduated from Atlantic High School in 1950. After high school Lorraine worked at Brown Shoe Store in Atlantic. On December 31, 1950 she was married to Duane Cohrs at Zion Lutheran Church in Atlantic. The couple farmed near Atlantic where they raised their family. In 1974, they moved to Clear Lake. Lorraine worked as a bookkeeper at Community State Bank. She later was employed at Clear Lake Bank and Trust until retiring in 1994. Upon her retirement, she and Duane moved to Ventura Heights. In June of 2014 she moved to Prairie View Apartments in Garner. Lorraine enjoyed playing cards, camping, sewing and gardening.