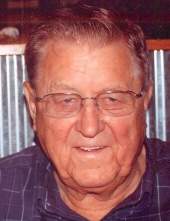 Lowell Ernest Indvik, the son of Sid and Sylvia (Peterson) Indvik, was born March 9, 1927 in Albert Lea, MN. He attended country school in Winnebago County and graduated from Forest City High School. Lowell served his country in the U.S. Army from May of 1946 to October 1947 being stationed in Japan. Following his honorable discharge, he returned to farm northwest of Forest City. He later was employed at Winnebago Industries until his retirement. On June 23, 1978 he married Melva Johnson at Zion Lutheran Church in Thompson. Lowell loved spending time with friends and family, playing cards and collecting toy tractors and airplanes.

He was preceded in death by his parents; and brother, Eldon “Babe” Indvik
To send flowers to the family in memory of Lowell Ernest Indvik, please visit our flower store.