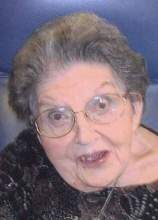 WINTERSET - Lucille A. (Yegge) Townsend, 95, of Winterset, formerly of Garner, was taken home to be with the Lord, Sunday, January 5, 2014. Lucille passed away very peacefully at the Winterset Care Center South in Winterset, Iowa, where she has resided since June. She spent her final days peacefully surrounded by her loving family.

A Mass of Christian Burial with viewing one hour prior to the service will be held at 11:00 a.m., Thursday, January 9th at St. Boniface Catholic Church in Garner, Iowa, with burial to immediately follow in the St. Boniface Catholic Cemetery. Memorial contributions may be directed to a fund established in her name and condolence may be left for the family at ochiltree.com. Cataldo Funeral Home in Garner is in charge of local arrangements.

Lucille was born October 9, 1918 to Albert and Catherine (Skella) Yegge on their farm in Wesley, Iowa. She was the youngest of eight children. She met Marvin Townsend in 1945 and they were married April 12, 1950 at St. Boniface Catholic Church in Garner, Iowa; where they were members for 50 years. This union was blessed with two daughters, Victoria and Trish. Lucille went to country school in Britt, Iowa and graduated from Garner High School in 1936. She worked in Garner as a checker for Walt Edelen's grocery store and she also worked for Charlotte Holta in her fashion store. In 1964 she went to work for the Tempo store in Mason City, Iowa and after that, she worked at Damon's department store. In 1970 she worked at Goodnature's in Garner for one year and then at EF Johnson's in Garner until she began babysitting. She baby sat in her home for 15 years and this was her most rewarding job. The kids called her Grandma and she gave each of them a wonderful head start in life with many crafts she organized for them, birthday parties she had and all of the special things she did for each of them. Many of them have carried these wonderful childhood memories with them throughout their lives. In 1998 they moved from Garner to Truro, Iowa to be closer to their family. They then moved to Winterset in 1999. She loved her family and friends and always put them first in her life. She loved to dance, play bingo, enjoyed going to the casino, making trips to Georgia to visit Trish and their trip to Branson, Missouri on their 50th Wedding Anniversary to see the Lawrence Welk Show was especially memorable to her.

She was preceded in death by her husband, Marvin on July15, 2004, her parents, her seven siblings, a grandson and a great grandson.
To send flowers to the family in memory of Lucille A. Townsend, please visit our flower store.