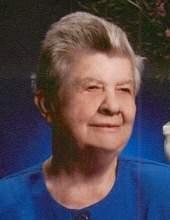 Funeral services will be held 10:30 A.M., Monday at St. Paul Lutheran Church in Garner with Rev. Scott Kozisek officiating. Burial will be in Concord Township Cemetery in Garner.

Visitation will be held from 3 to 6 P.M., Sunday at the Cataldo Funeral Chapel in Garner and will continue one hour prior to services at the church.

Lucille Vida Jurgemeyer, the daughter of Leslie and May (Rosenau) Hartbeck, was born October 4, 1924 near Klemme. She attended the rural schools of Ell Township and Klemme High School where she graduated as class valedictorian in 1942. Lucille furthered her education at Waldorf College where she received her normal training teaching certificate. She then taught school near Fertile for a few years. On November 18, 1945 she was united in marriage to Louis Jurgemeyer at Immanuel Reformed Church in Klemme. The couple farmed together east of Klemme until retiring in 1986. In 1992, they moved into Garner. Lucille enjoyed her family, gardening and attending Bible study.

She was preceded in death by her parents; and husband, Louis in 1998.
To send flowers to the family in memory of Lucille V. Jurgemeyer, please visit our flower store.