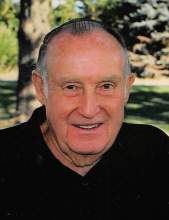 Funeral services will be held 10:30 A.M., Monday, November 4, 2019 at the United Methodist Church in Garner with Rev. Michael Shaffer officiating. Burial will be at Concord Township Cemetery in Garner with military rites by the Garner Veterans Ceremonial Unit.

Visitation will be held form 3 to 5 P.M., Sunday at the Cataldo Funeral Chapel, 160 E. 4th St., in Garner and will continue one hour prior to services at the church.

Memorials may be directed to the United Methodist Church in Garner or MercyOne North Iowa Hospice.

Lyle “Pete” Edwin Sharar, the son of Glenn and Ella (Alverson) Sharar, was born January 16, 1928 in Alden, Iowa. He graduated from Alden High School in 1945 and served his country during World War II in the U.S. Army being stationed in White Sands, NM. Following his honorable discharge in August of 1947, he returned to Alden where he farmed with his father and worked at Ackerman’s Inc. in Popejoy. On February 13, 1954, he married Joan Kempthorne in Davenport, Iowa. They lived in Popejoy, Iowa Falls and Mason City before moving to Garner in 1969. Pete was employed at Walnut Grove Feed in Mason City and Ollenburg Motors in Garner before starting his own business, “All Iowa Sales” in Garner in 1970 which he operated until his retirement at the age of 70. Pete and Joan wintered in Rio Valley Estates in Weslaco, TX for many years. He enjoyed gardening, fishing trips with his brother to Canada and watching sports on television.

He was a member of the United Methodist Church in Garner and the Garner American Legion.

He was preceded in death by his parents Glenn and Ella Sharar; grandsons, Christopher and Chad Guthmiller; and brother, LaVerne Sharar.
To order memorial trees or send flowers to the family in memory of Lyle "Pete" Sharar, please visit our flower store.