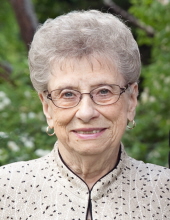 Mardgy Nadene (Hocum) Schlawin peacefully passed away with her family at her side on Friday, June 16, 2017 at Muse Norris Hospice Inpatient Unit in Mason City, following a short journey with cancer. Nadene will be remembered by her family and friends in many ways -- as a loving and dedicated daughter, sister, cousin, friend, wife, mother, grandmother, great-grandmother, homemaker, employee, and long-time Forest City business woman. More than anything else, she was a faithful follower of Jesus Christ.

Born May 15, 1930 in the family farmhouse near David, Iowa (Mitchell County), to Mahlon A. Hocum and Anna M. (Dockstader) Hocum, she joined her brother Milford K. Hocum.
The family moved to Forest City in 1933 and Nadene graduated from Forest City High School in 1948. During high school, she worked in Mangan’s Pharmacy and after graduation as an assistant in the office of Dr. E.W. Alder.

On April 18, 1952, Nadene and Virgil R. Schlawin were married in the home of her brother in Forest City. The couple moved several times due to Virgil’s service in the U.S. Air Force. When he was deployed to Okinawa, she returned to her parent’s home in Forest City. Upon his discharge, the young family lived in southeastern South Dakota for several years, moving back to Forest City in late 1959.

In 1966, they acquired a Montgomery Ward sales agency, which Nadene solely managed until Virgil joined her in the business operation in approximately 1972. They owned this business on Forest City’s main street until the company ceased catalog sales operations in 1985. One year later, the couple became the managers of Forest City Granite Works. When Virgil passed away in 1994, Nadene continued in the business, working there until just a few weeks before her death, totaling over 31 years of service. For many years, Nadene also sold Home Interiors products.

At an early age, she accepted Jesus Christ as her personal Savior, participating in youth activities at American Baptist Church (Calvary Baptist). As an adult, she was very active through the years teaching Sunday School, singing in choirs, leading AWANA and other youth groups, serving as custodian, and participating in Mission Circle and the XYZ group.

Visitation will be at Cataldo Schott Funeral Home in Forest City from 5:00 to 7:00 p.m. on Wednesday, June 21. Funeral services will be at 11:00 a.m. on Thursday, June 22 at Calvary Baptist Church in Forest City with Rev. Doug Farrell officiating. Pall bearers will be her sons and grandsons. Interment will be in Madison Township Cemetery, Forest City.

Memorials may be given in memory of Nadene Schlawin to Hospice of North Iowa and Calvary Baptist Church, Forest City.
To order memorial trees or send flowers to the family in memory of M. Nadene Schlawin, please visit our flower store.
Send a Sympathy Card