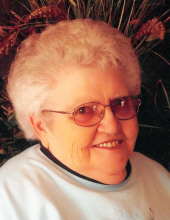 Madelyn Pauline Paca, the daughter of Milo “Orris” and Lenora (Lawhorn) Lundy, was born December 5, 1931 in Clear Lake. She graduated from Klemme High School in 1949. On January 22, 1951, she was married to George Paca at St. Wenceslaus Catholic Church in Duncan. They lived on the original Paca farm near Duncan and farms by Klemme and Hayfield before moving to Forest City in 1980. Madelyn helped George on the farm and was employed at Stitchcraft at Winnebago until her retirement. In 1991, Madelyn and George moved to Garner with Madelyn moving back to Forest City in 2017. She enjoyed her family, grandchildren, cross stitch, playing cards and camping.