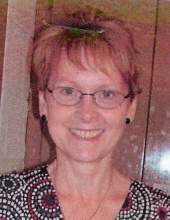 Maralyn Ann Anderson, 57, passed away on Tuesday, November 24, 2015, at the Muse Norris Hospice Inpatient Unit in Mason City after a long courageous journey with cancer.

Inurnment will be held in the Oakland Cemetery.

In lieu of flowers memorials may be directed to the Winnebago County Food Bank.

Maralyn Ann Anderson, the daughter of Lester and Phyllis (Luther) Rogness was born September 13, 1958 in Forest City. She attended Forest City Schools graduating in May of 1977. On March 5, 1978 Maralyn was united in marriage to Rodney “Tuff” Anderson. They had two children, Tim and Frank Anderson.

Maralyn worked at Winnebago for 24 years until having to retire due to her health. Maralyn was a member of the Pilot Knob Lutheran Church. She enjoyed spending time with her family and friends, especially her grandchildren. She will be dearly missed by all who knew and loved her.

Maralyn was preceded in death by her parents; sister, Ellen Nemmers; and brother, Mervin Rogness.
To send flowers to the family in memory of Maralyn Ann Anderson, please visit our flower store.