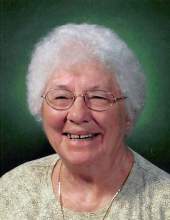 Funeral services will be held 10:30 A.M., Wednesday, April 12th at St. Boniface Catholic Church in Garner with Fr. Jim Dubert officiating. Burial will be in the church cemetery.

Marcella Eleanor Erdmann, the daughter of Charles and Lena (Chizek) Nedved, was born June 25, 1924 on a farm northeast of Duncan. She attended the rural schools of Garfield Township, Hancock County. On August 25, 1943, she was married to Earl Erdmann at St. Wenceslaus Catholic Church in Duncan. They lived in Washington, D.C. while Earl was employed in the clerical department of the FBI. In 1953, they moved to a farm southwest of Garner where they raised their family. After her children were grown, she worked at Winnebago Industries in Forest City until her retirement. She enjoyed sewing, crafts, canning and gardening.

She was a member of St. Boniface Catholic Church and Rosary Society.