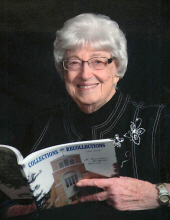 Visitation will be held from 5 to 7 P.M., Thursday at St. Wenceslaus Catholic Church with a combined CD of A, Catholic Workman and Rosary Society rosary at 4:45 P.M. and a Scriptural wake service at 7 P.M. Visitation will continue one hour prior to services at the church. Cataldo Funeral Home in Garner is in charge of arrangements.

Memorials may be directed to the Margaret Hrubes Memorial Fund.

Margaret Mae Hrubes, the daughter of Joseph and Alice (Zabuensky) Pavelka, was born June 4, 1919 on a farm east of Britt. She graduated from Britt High School in 1937 and after a year at Britt Jr. College taught at Liberty No. 3 country school for two years and Erin No. 1 for one year. On June 10, 1941 she was married to John Hrubes at St. Wenceslaus Catholic Church in Duncan. They farmed south of Duncan until 1979 when they retired and moved into Garner. Her hobbies included gardening, baking, sewing, playing cards, puzzling, crossword puzzles, quilting, and music. Margaret was known as a historian and author.

She was a member of St. Wenceslaus Catholic Church in Duncan, Rosary Society, Catholic Workman FCSLA W51 and Catholic Daughters of America – Court Isabella No. 642.

Margaret was a loving mother, grandmother and great-grandmother and will be missed by her family and friends.
To order memorial trees or send flowers to the family in memory of Margaret Hrubes, please visit our flower store.
Send a Sympathy Card