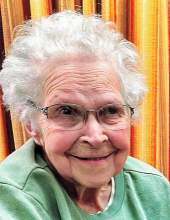 A funeral mass will be held 10:00 a.m., Friday, December 24, 2021 at St. Boniface Catholic Church in Garner with Rev. Fr. Andrew Marr officiating. The service will be livestreamed on the Cataldo Funeral Home Facebook page. Burial will be at St. Boniface Cemetery.

Cataldo Funeral Home is in charge of arrangements.

Margaret Marie Schleusner, the daughter of Adolph and Mary (Nedved) Ptacek, was born February 1, 1929 on a farm south of Duncan.  She attended the rural schools of Liberty Township, Hancock County.  On February 9, 1948 she was married to Louis “Bud” Schleusner at St. Wenceslaus Catholic Church in Duncan.  They lived on the Schleusner home place northwest of Garner until the spring of 1973 when they moved to their home west of Garner.  Marge and Bud farmed together until their sons took over the family operation.  After Bud passed away in 2005, she continued to live in their home up until the last few months.  She enjoyed spending time with her family, cooking, baking, playing cards and going to casinos.

She was preceded in death by her parents; husband, Bud; son, Randy; and siblings, Mary Kral, Tony Ptacek, Agnes Kumsher, Blanche Witte and Clarence Ptacek.
To order memorial trees or send flowers to the family in memory of Marge M. Schleusner, please visit our flower store.