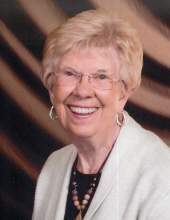 Burial will be held in the Pilot Knob Lutheran Cemetery.

In lieu of flowers, memorials may be directed to the Pilot Knob Lutheran Church.

Marian was born April 6, 1930 to Roy and Gail (Brunsvold) Peterson on a farm in Newton Township near Lake Mills. She was baptized at North Prairie Lutheran Church near Scarville and confirmed at Grace Lutheran Church in Hanlontown. Marian attended country school in Winnebago and Worth counties until she entered Hanlontown High School where she graduated in 1948.

It was in high school where Marian met the love of her life. She was united in marriage to Roger Jennings on August 25, 1951. Marian and Roger were always together. If you saw one of them, the other one was almost always there. They celebrated 67 years of marriage last August.

After graduation from high school, Marian worked as the bookkeeper and cashier at Citizens Savings Bank in Hanlontown for almost 10 years. In 1953, she and Roger moved to a farm west of Fertile. This became their lifelong home where they raised their three children and continued to live throughout their retirement.

Marian worked alongside Roger her entire life. They loved to farm and raise livestock, especially cattle. When Roger and his brother Ralph purchased The Cow Palace Sale Barn in 1971, Marian became the bookkeeper and office manager. For over 20 years, Marian was the heart of the Jennings Brothers Cow Palace Auction business.

After retirement from the sale barn, Marian continued to help raise cattle on the farm. Their love of gardening kept them busy as it was a passion of Marian’s. Winters in Florida, frequent trips to Branson and spending as much time as she could with family, especially her grandchildren, is what she enjoyed most.

Marian was involved with many community and church organizations, including serving as a 4-H leader and a member of the Worth County Election Board.