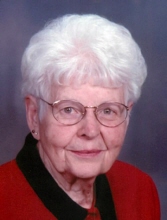 Mass of Christian Burial will be held 10 A.M., Monday, September 16th at St. Patrick's Catholic Church in Britt with Fr. Jerry Kopacek and Fr. Dennis Miller as concelebrants. Burial will be in St. John's Catholic Cemetery in Duncan.

Visitation will be held from 3 to 6 P.M., Sunday at St. Patrick's Catholic Church with a rosary at 2:45 P.M. and a Scriptural wake service at 6 P.M. Visitation will continue one hour prior to services at the church.

Memorials may be directed to the family or Hospice of North Iowa. Cataldo Funeral Home in Britt is in charge of arrangements.

Marie Ann Brcka, the daughter of Frank and Elizabeth (Kudej) Kopacek, was born December 31, 1920, the eleventh of twelve children, on a farm southeast of Britt. She attended the rural school near her home. On January 9, 1940 she married George Brcka at St. Wenceslaus Catholic Church in Duncan. They made their home on a farm southeast of Britt where they raised their five children. In 1972, they retired from farming and moved to Garner and five years later to Clear Lake. In 1997, they built a new home and moved to Britt. Marie was a devoted wife and mother, a wonderful baker, and always a gracious hostess in her home. She took great pleasure in caring for her flowers and gardens; lovingly made numerous comforters and quilts for all members of her family; and shared hundreds of hand sewn potholders and embroidered tea towels with family and friends.

To order memorial trees or send flowers to the family in memory of Marie Ann Brcka, please visit our flower store.
Send a Sympathy Card