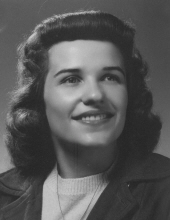 Memorial services will be held 10:30 A.M., Tuesday, October 31st at St. Paul Lutheran Church in Garner with Rev. Scott Kozisek officiating. A private burial will be held at Concord Township Cemetery in Garner.

Memorials may be directed to St. Paul Lutheran Church in Garner.

There will be no visitation. Arrangements are with Cataldo Funeral Home of Garner.

Marilyn Harriet Boehnke, the daughter of Edward and Elsie (Pueggel) Boehnke, was born on November 15, 1928 on the farmstead that she would live on most of her life. She was smack dab in the middle of two older sisters and two younger brothers. Her earliest schooling took place at Concord No. 2 country school: a one room schoolhouse located just west of the farm. She attended grades five through eight at St. John’s Lutheran School and went to Garner High School in the fall of 1941. She graduated in 1945 at the age of 16. She went on to Waldorf College and worked the entire two years she was there to help defray her college costs. Marilyn graduated from Waldorf in 1947 with an associate’s degree in music. With placement help from the college, she landed her first job at the Lutheran Home Finding Society in Fort Dodge. She was responsible for the care of forty children. She then went on to work for Dr. Hoover, a local dentist in Fort Dodge. Marilyn attended classes at night to learn to be a dental assistant. She adored both jobs. In 1948, she met Harlan Hayes of Webster City at a YWCA dance in Fort Dodge. They were married on June 19, 1949 at St. Paul’s Lutheran Church in Fort Dodge. In the winter of 1951, the young Hayes family, which now included baby Steven, moved to the farm in Garner. Babies came in predictable succession every two years: Sandra, Dean, Susan, Douglas, Debra, and Linda. Rachel came along seven years later in 1968. During this time, Marilyn was active in St. John’s choir, Fellowship Club and Ladies Aid. As the children grew, Marilyn took on the job of school board member. She knew firsthand how important it was for Garner to make education a priority. Marilyn was proud of the community for the addition to the high school during her tenure when so many small communities were reluctant to build because of the farm recession. She also did survey work for Iowa State University Extension Service and as a master gardener, inspected the efforts of young gardeners for the Hancock County Fair. Marilyn was very active in the Garner American Legion Auxiliary for many years. In 1991, Marilyn and Harlan moved into Garner. Marilyn continued to stay busy cooking at the Garner Sale Barn. She was a familiar fixture behind the deli counter at Bill’s Red Owl for many years dispensing equal amounts of food and wisdom. Throughout her life her faith and her family remained the focus. The multitudes of family and friends who often just appeared at the Hayes Farm or household were guaranteed a delicious meal and wonderful fellowship that always began with the words, “Come Lord Jesus, be our guest.”