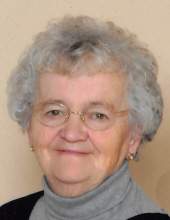 A funeral mass will be held 10:30 A.M., Wednesday, October 7, 2020 at St. Boniface Catholic Church in Garner with Rev. Andrew Marr officiating. Burial will be at St. Boniface Cemetery. The service will be livestreamed on the Cataldo Funeral Home Facebook page.

Visitation will be held from 4 to 7 P.M., Tuesday at St. Boniface Catholic Church with a Catholic Daughters of the Americas rosary at 4 P.M. and a Scriptural wake service at 6:30 P.M. The family strongly requests masks be worn and social distancing guidelines be followed.

Marion Joan Buckley, the daughter of Vennie and Josephine (Skubal) Brozik, was born August 30, 1934 in Chicago, Illinois. She and her Babi (Grandma in Czech) Mary had a special bond and she learned to speak Czech from her. At the age of three, her family moved to Hayfield, Iowa where she graduated from Hayfield Consolidated School in 1951 as valedictorian of her class. She continued her education at Hamilton Business School in Mason City and then was employed at the Hancock County Soil Conservation Office. She met the love of her life, Elmer Buckley at a Rural Young People (aka Rough Young Pups) dance. Marion and Elmer were married on August 10, 1955 at St. Boniface Catholic Church in Garner. They made their home on a farm southwest of Garner, moving to the Century farm in March of 1964 where they raised their 8 children. Her days were fulfilled being a farm wife and caring for the chickens, dairy cows and pigs. She found enjoyment in her children and their activities, ballroom dancing with Elmer and sewing and mending almost anything. There was always an abundance of home cooked goodies if you stopped to visit. Marion was also an avid reader, Iowa State Cyclone fan and loved history.

She was a lifelong member of St. Boniface Catholic Church and a member of Catholic Daughters of the Americas.

The family members who will greet her in heaven are her parents; husband, Elmer; son, Steven; grandson, Ryan Hrubes; two sisters-in-law, Ella Marie (Jim) Ridder and Margaret (Tony) McLaughlin; and brothers-in-law, Leonard and Maurice Buckley.
To send flowers to the family in memory of Marion J. Buckley, please visit our flower store.