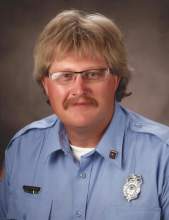 GARNER – Mark E. Lewerke, 56 of Garner lost his battle with cancer on Saturday, October 24, 2015 at the Muse Norris Hospice Inpatient Unit in Mason City while holding his wife’s hand.

In lieu of flowers, memorials may be directed to the Mark Lewerke Memorial Fund in care of the family.

Cataldo Funeral Home in Garner is in charge of arrangements.

Mark was born December 1st, 1958 in Britt, Iowa to Jerry and Darlene “Pat” (Rapp) Lewerke. He graduated from Garner-Hayfield High School in 1977 and Mercy Des Moines in 1986 as a paramedic. He was united in marriage to JoAnn C. Miller on August 30, 1980 in Belmond and they made their home in Garner, Spirit Lake, Prescott, AZ and Chino Valley, AZ. He spread his 32 year Emergency Medical Service career amongst Garner Volunteer Ambulance Service, Dickenson County Memorial Hospital, and finally with Clear Lake Fire Department as a Paramedic/Fire Fighter 1, until his death. The friendships he acquired with the EMS, Fire, and Law Enforcement realm were very special to him, often talked about and a great source of joy in his life. He shared countless conversations and cups of coffee with these great men and women, who also were so giving of themselves to their careers. He always said that being a Paramedic is not a job, but a “calling”.

Mark was a member of the Garner E-Free Church. His faith in the Lord was very important to Mark and his wife and this was his primary source of strength during hard times, especially this past year. Mark loved carpentry and worked as a general contractor for over 35 years, both independently and with his father and brother. He proudly built over 50 homes and was in the process of remodeling his personal home when he passed. Mark was always there to help his family and friends with carpentry projects, building racecars or whatever else was needed.
Mark’s favorite hobby was auto racing from the days of watching his father race, to racing go-karts as kid, having his own modified car, and helping his brother. Two of his most memorable racing events were getting Rookie of the year in 1990 and watching his brother win the 2006 IMCA Super Nationals in Boone, IA. He enjoyed spending time with his granddaughters, riding his Harley, learning to play guitar, morning coffee with the guys, annual trips to Fort Myers Beach with JoAnn, and truck rides with Reagan (his dog).

Those waiting for him in Heaven at the pearly gates are his mother, Pat; sister, Marne; and other close family and friends.

A special thank you to all the family and friends who have lent a hand with construction projects in the last year. All the visits that he had with family and friends during his last days will be forever treasured.
To order memorial trees or send flowers to the family in memory of Mark E. Lewerke, please visit our flower store.