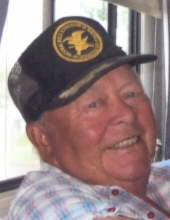 Mark F. Mary Jr., 79, of Joice, died Tuesday, September 23, 2014 unexpectedly at his home from natural causes.
Visitation will be held from 4-7 P.M., Thursday (September 25, 2014) at the Cataldo Schott Funeral Chapel, 505 N. Clark St. Forest City, IA. A Scriptural Wake service will be held at 6:30 P.M. at the funeral chapel.
A funeral service will be held 10:30 A.M., Friday September 26, 2014 at St. James Catholic Church in Forest City with Father Dennis Miller officiating. Private family burial of cremains will be held in Oakland Cemetery at a later date. Memorials may be directed to the Mark F. Mary Jr. Memorial Fund in care of the family.
Mark Jr. was born April 18, 1935 in Mason City, Iowa the son of Mark J. Sr. and Willamena Viola (Vondracek) Mary. He attended schools in Garner. Mark was married to Jeanette Fischer in 1957 in Garner, to this union, four children were born. Mark worked at Winnebago Industries for 36 years, retiring in 1998. Mark enjoyed fishing, hunting, camping, boating and gardening. Mark enjoyed spending his time outdoors. His family and grandchildren were very important to him and he enjoyed the times he spent with them all. Mark was a life-long member of the Catholic Church and was a member of the different ones in the area through the years. Mark will be dearly missed by all who knew and loved him.
He is survived by his wife, Jeanette Mary of Joice; children, Steven Mary and fiancée Debbie Frey of Denton, TX, Crystal Davis of Lake Mills, Brad Mary and wife Kim of Lake Mills; thirteen grandchildren and seventeen great grandchildren; siblings, Ron Mary and wife Joyce of Dadeville, MO and Robert Mary and wife Cindy of Forest City; brother and sister-in-laws, Jerry Fischer of Madrid, IA, Deanna McColloch of Forest City, Tom Fischer and wife Diana of Joice, Pat Wood and husband Roger of Woden and Jeff Fischer of Crystal Lake and many nieces and nephews.
He was preceded in death by his parents; son Mark Mary and daughter-in-law, Peggy Mary.
To order memorial trees or send flowers to the family in memory of Mark F Mary Jr., please visit our flower store.
Send a Sympathy Card