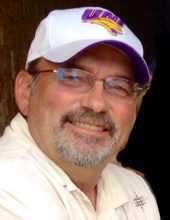 Funeral services will be held 10:30 A.M., Thursday, January 19th at St. John’s Lutheran Church east of Garner with Rev. Carl Hedberg officiating. Burial will be in the church cemetery.

Visitation will be held from 5 to 7 P.M., Wednesday at the Cataldo Funeral Chapel, 160 E. 4th St., in Garner and one hour prior to services at the church.

Mark Bradley Pueggel, the son of Harold and Carol (Floy) Pueggel, was born August 6, 1959 in Forest City. He grew up on the family farm with his four sisters and older brother. Mark graduated from Ventura High School in 1977. On May 30, 1980, he married Julie Monson at the United Methodist Church in Forest City. To this union two children were born, Emily Teresa and Mark Adam Pueggel. Mark spend the last nineteen years farming corn and soybeans on the family’s Century Farm northeast of Garner. His son, Mark Adam joined him in the business and they farmed side by side for over a decade. Mark loved the church, his family and many friends. He was a devoted husband, father and grandfather.

He was a member of St. John’s Lutheran Church where he was baptized and confirmed.

He was preceded in death by his father-in-law, Marvin Monson.
To order memorial trees or send flowers to the family in memory of Mark Pueggel, please visit our flower store.
Send a Sympathy Card