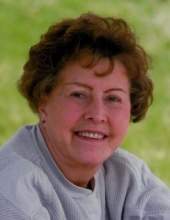 Marlys R. Thovson (nee Adams) of New Providence, NJ, formerly of Berkeley Heights, NJ passed away on Sunday, December 2, 2018 with her loving husband of 63 years, Dennis, by her side.

Marlys was born to Sydney and Alice Adams in Forest City, Iowa, where she grew up with 6 siblings – Eugene, Everett, Robert, Charlene, Eldon and Hellyn. She met her beloved husband, Dennis Thovson in 1953, where on their first date, and perhaps as a signal of things to come, they attended a dirt track race! Even though Marlys’ nice dress was covered in dirt, she stuck with him, and when Dennis completed his flight training and earned his “wings” as a US Naval aviator, they were finally able to marry in 1955. Marlys and Dennis moved to New Jersey in 1962 when Dennis was hired by Bell Labs, first settling in New Providence, then moving to a home in Berkeley Heights in 1967. For more than 63 years, Marlys shared Dennis’ passion for cars, especially Porsches, and served as his loyal “co-pilot” and “co-driver” on the track of life!

Marlys worked for many years at Overlook Hospital in Summit, NJ as a Hospital Administrator. She was a longtime member of the Northern New Jersey Region of the Porsche Club of America, acting as Secretary of the Region since 1971, and as such, she was the longest standing officer. Marlys and Dennis volunteered countless hours for the Porsche Club whether at the High Performance Driving Schools, Annual Wine Tasting Events, and almost all other events. In her role as a chairperson of the Membership Committee, she was known for being diligent, enthusiastic and welcoming to all new members and dedicated to ensuring that members participated and renewed. With her warm welcoming smile and strong will, she was beloved by all members of the Club for her kindness and tireless commitment. For her more than 50 years of dedicated service to the Club, Marlys was awarded Honorary Lifetime Member Award and the President’s Trophy.

Marlys is survived by her beloved husband, Dennis Thovson, three brothers, several nieces and nephews, and a host of cherished friends. She was pre-deceased by her parents, one brother and two sisters.

In lieu of flowers, kindly consider donations to the Lustgarten Foundation for Pancreatic Cancer Research, through In Memory Of at
www.inmemof.org/marlys-r-thovson
To order memorial trees or send flowers to the family in memory of Marlys R. Thovson, please visit our flower store.