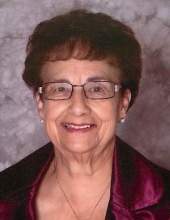 Marvel Mae Smidt, 83, of Forest City died Wednesday, April 6, 2016 at her home surrounded by her family.

Funeral services will be held 10:30 A.M., Monday, April 11, 2016 at the United Methodist Church in Forest City with the Rev. Charles Layton officiating. Burial will be at Madison Township Cemetery in Forest City.

Visitation will be held 5 to 7 P.M., Sunday at the Cataldo Schott Funeral Home in Forest City and will continue one hour prior to the service at the church.

Marvel Mae (Platts) Smidt, the daughter of Cecil and Mary (Gaskill) Platts was born on May 9, 1932 at home on the farm on Wheelerwood Drive northeast of Hanlontown. She attended country school in Danville Township in Worth County until she and her parents moved closer to Hanlontown. She graduated from Hanlontown High School in 1951.

Marvel married Donald Ray Smidt on November 26, 1951 at the United Methodist Church in Forest City, the first couple to be married in the present church building. The couple farmed with Donald’s parents until he was drafted into the service in 1952. Then Marvel returned to Hanlontown to live with her parents. Their first son was born while Donald was stationed in Korea. Upon Donald’s return from the service in 1954 they resumed farming the home place until moving to Forest City in 1979.

Marvel was a member of the United Methodist Church, UMW circle. She also belonged to a bowling group, Red Hat Society, American Legion Auxiliary and the BCNU Club. For a number of years Marvel worked at the Marriott Food Service at Waldorf College. She enjoyed traveling, walking, collecting dolls and working with flowers in her yard.

She was preceded in death by her parents and an infant brother.

The family would like to thank Hospice of North Iowa for the wonderful care and concern that she received.

Memorials may be directed to the Marvel Smidt memorial fund in care of the family.
To send flowers to the family in memory of Marvel Mae Smidt, please visit our flower store.