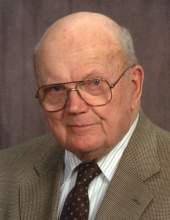 Marvin C. Olson, age 91, of Forest City, Marvin passed away peacefully on September 11, 2016 at Good Samaritan Center. His family is comforted knowing that Marvin is present with his Savior and reunited with Jeanette.

Funeral services will be held at 2:00 P.M., Friday, September 16, 2016 at the First Baptist Church in Forest City with Pastor Eric Weaver officiating.

Visitation will be held from 12:30 P.M. to service time at church on Friday.
Burial will be held in the First Baptist Cemetery in Forest City with Military Honors performed by the Forest City American Legion.

In lieu of flowers, memorials may be directed to the First Baptist Church, Hospice of North Iowa or the Good Samaritan Center in Forest City.

Marvin Conwell Olson was born in Forest City, Iowa, on February 16, 1925, the eldest son of Albert R. Olson and Ruth Pitkin Olson. At an early age, he accepted Christ as his Savior and lived out his life in service to the Lord and to others.

He graduated from Forest City High School in 1943, and took evening business classes at Waldorf College. He farmed until he entered the army and served from 1945 to 1946.
Following his discharge from the service he returned to farming in Forest City. In 1950 he married Jeanette Boman, who lived on the neighboring farm. He also worked part-time at Olson Funeral Home as an assistant. In 1961 he joined Winnebago Industries as its 14th employee and held various positions in manufacturing and purchasing over 29 years of service.

He and Jeanette raised three children and were married for 45 years until her death in 1995. Both were lifelong members and active at First Baptist Church, and Marvin served on various boards, including trustee and deacon.

Loyal to his hometown, Marvin played a key role in the acquisition and restoration of the Mansion Museum. He volunteered there regularly, especially enjoying giving tours to school groups. As a passionate promoter of Forest City, he was active in the development of Heritage Park and was a frequent tour guide.

He enjoyed farming, local history, coffee with friends, spending time with his family, and telling a good joke. He always was willing to help those in need.
Marvin is survived by two daughters, a son, and five grandchildren: his daughter Marilyn (John) Schreiber of West Concord, MN, and their daughter Anne; his daughter Connie (Randy) Morrill of Elko, MN, and their daughters Britta (Michael) Probert, Jenna, and Sarah; and his son Rick (Kate) Olson of Eden Prairie, MN and their son Anders. He is also survived by a brother, Dean (Jan) Olson of Georgetown, TX, a sister, Jo Ann (Robert) Stroup of Monument, CO, and nieces Kim Olson and Deanna Funk.

He was preceded in death by his parents and his wife Jeanette.
To send flowers to the family in memory of Marvin Conwell Olson, please visit our flower store.