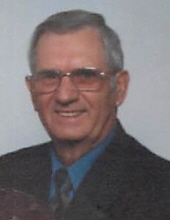 Funeral services will be held at 10:30 A.M. on Friday, April 1, 2016 at Bethel Lutheran Brethren Church, 3906 Bluebill Ave., Joice, with the Pastor Kevin Olson officiating. Burial will be in Grant Township in Woden.

Marvin Oscar Hanna, the son Iren and Esther (Holland) Hanna was born October 3, 1932 in Forest City. Marvin grew up in the Woden area where his dad farmed. As a young man he enjoyed roller-skating, this is where he met Darlene Bernice Torkelson, they were united in marriage on October 15, 1952 at the Beadle house southeast of Forest City. They started out in a small house that he and his dad built on the homestead in the Thompson/ Woden area. In 1962 Marvin and Darlene felt the need for a relationship with Jesus and asked him into their life and home. After living on several farms they settled in the Miller area. They farmed there until 1982 when they moved to Forest City. Marvin was employed by the Forest City School as a custodian, retiring in 1997.

Darlene and Marvin enjoyed camping, gospel sings and being a part of Six Seasons Christian motorcycle group. Marvin was a very talented craftsman from building his own garden tractor, modifying farm equipment, auto body repair and restoring old vehicles including a 1961 Ford, the last car his dad bought new.

He was preceded in death by his parents and wife, Darlene.
To order memorial trees or send flowers to the family in memory of Marvin Hanna, please visit our flower store.
Send a Sympathy Card