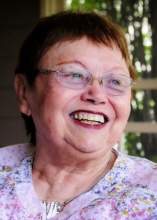 Funeral services will be held 10:30 A.M., Wednesday, July 2nd at Peace Reformed Church in Garner with Pastor Harvey Opp officiating. Burial will be in the church cemetery.

Visitation will be held from 4 to7 P.M., Tuesday at the Cataldo Funeral Chapel, 160 E. 4th St., in Garner and will continue one hour prior to services at the church.

Mary Alice Greiman, the daughter of William and Alice (Peterson) Baggs, was born September 4, 1935 in Mason City. She was baptized and confirmed at St. Paul Lutheran Church in Garner. Mary Alice attended and graduated from Garner High School in 1953. On September 4, 1954 she was married to Clayton L. Greiman at St. Paul Lutheran Church in Garner. They lived in Germany from 1954 to 1956 while Clayton served his country in the U.S. Army. They then returned to Garner and made their home on the Greiman family farm 2 1/2 miles south of Garner where they raised their children and lived all of their married life. Mary Alice dearly loved her three children, grandchildren, great grandchildren and her church. She enjoyed playing bridge, spending time with friends and putting together scrapbooks for her family.

She was an active member of Peace Reformed Church where she belonged to the Women's Missionary Society and was a Sunday school teacher. She also belonged to the Beta Sigma Phi Sorority in Garner for over 50 years and several bridge clubs.

She was preceded in death by her parents; sister, Dorothy Albertson; brother in-law James Ginsberg; nephew, Aaron Ginsberg; and a great grandson baby boy Berhow.
To send flowers to the family in memory of Mary Alice Greiman, please visit our flower store.