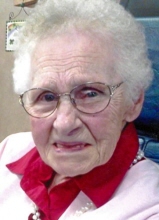 Mary E. Church, 94, of Forest City, died Friday, March 14, 2014 at the Good Samaritan Center in Forest City.
A funeral service will be held Thursday, March 20, 2014 at 10:00 A.M. at the First Baptist Church, Forest City, with Pastor Doug Snyder officiating.
Visitation will be held 4-7 PM Wednesday (March 19, 2014) at Petersen Lund Funeral Home, 505 N. Clark St., and will continue one hour prior to services at the church.
Burial will be held in Amsterdam Cemetery in Kanawha, Iowa following the service.
In lieu of flowers memorials may be directed to the Mary E. Church memorial fund in care of the family.
Mary E. Church was born November 27, 1919 in Forest City, Iowa, the daughter of Leonard and Edna (Jacobson) Klipping. She was married to Dent Church on May 20, 1939, to this union nine children were born. Mary enjoyed taking care of her family, she worked hard, and was always proud of taking care of her home and raising her children. She enjoyed tending to her garden, canning, cooking, and also baking; she was especially known for her homemade bread. She enjoyed the times she spent with her family and especially all her grandchildren. She will be dearly missed by all who knew and loved her.
Mary will be sadly missed by her eight children; Roger (Joyce) Church of Garner, IA, Steve (Lynne)Church of Forest City, IA, Joan(Ronald)Brown of Mason City, IA, Arlene Church of Forest City, IA, Carol (Daryle)Jass of Ankeny, IA, Ruth Lang of Garner, IA, Val(Bob) Formanek of Ventura, IA, Laine Church of Mason City, IA, Sandi(Mike) Randall of Clear Lake; brother, Marvin Klipping of Britt, IA, sister, Joanne Symes of Mason City, IA, many nieces, nephews, twenty five grandchildren, fifty-eight great-grandchildren, and eight great great grandchildren.
Mary was preceded in death by her husband Dent Church (06/11/1970); parents; six brothers; four sisters; son in-law John Lang, and an infant daughter Diane.

To order memorial trees or send flowers to the family in memory of Mary E. Church, please visit our flower store.
Send a Sympathy Card