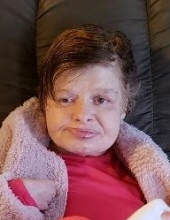 In lieu of flowers, memorials may be directed to MAJOPA.

Mary Ellen Garvin was born on December 12, 1955 at St. Vincent Hospital
in Sioux City, Iowa. After a normal delivery, her mother released her
for adoption. She was placed in an adoptive foster home for 9 months
until she returned to St. Monica's home due to her delayed development.
She was diagnosed as having mild birth palsy and was admitted to
Woodward State Hospital, where she resided for 27 years. In 1985, Mary
moved to North Central Human Services, which later became Krysilis and
is known today as Mosaic. For the last 35 years of living there, she has
touched many lives. She will be remembered for her spunky attitude and her
own ability to let you know her likes and dislikes. Because "people
watching" was so important to her, she enjoyed going to camp, the
Spencer Fair, Como Zoo and many other outings, including shopping and
out to eat. Some of her favorite activities at home, were watching
movies and watching (male) sports on TV.

Mary just had this way of melting your heart. She will be forever loved
and forever missed by her friends and Mosaic family.
To order memorial trees or send flowers to the family in memory of Mary E. Garvin, please visit our flower store.
Send a Sympathy Card